The American orbital reusable aircraft Boeing X-37B completed its mission today, during which it spent 908 days in Earth orbit. The OTV-6 mission (Orbiter Test Vehicle 6 – it was the sixth spaceflight in the history of the X-37B) broke the previous record for the duration of such a machine in space – “only” 780 days – by eighteen weeks. For comparison, it is worth noting that the first five of the seven Soviet space stations in Salyut were in space for a shorter period.

The OTV-6 / USA-299 mission was carried out under the auspices of US Space Force. The orbiter landed at the shuttle landing facility at the Kennedy Space Center in Florida at 5.22 a.m. local time (11.22 p.m. Poland time).

On May 17, 2020, an Atlas V 501 rocket operated by the United Launch Alliance was in an orbital vehicle at Complex 41 at Cape Canaveral Air Force Base (now a space base), this was the first launch of a spacecraft organized under USSF command. The program began in the structures of the Air Force, but after the creation of the Space Forces in December 2019, it took charge of the X-37. However, most of the missions performed during the flight are hidden behind an impenetrable veil of secrecy.

This important mission will include more experiments than any previous X-37B flight, including two NASA experiments. She said Then Air Force Secretary Barbara Barrett on the occasion of take-off. – The first is a sample that checks the interaction of selected materials with conditions in space, and the other examines the effect of cosmic rays on seeds. A third experiment, developed by the Naval Research Laboratory, converts solar energy into microwave energy and studies the transmission of this energy to Earth.

This image (which we rotated 90 degrees) reveals for the first time what the mission module installed on the back of the X-37B looks like.
(US Space Force)

In addition, as part of the OTV-6, the orbital vehicle was also equipped with a module with the FalconSat-8 satellite, developed by the Air Force Academy, which itself conducted five more experiments. And this is where the exposed elements of the entire task end. The military part of the mission, according to some analysts, may include research on reconnaissance and espionage activities from space or experiments to launch satellites into low Earth orbit. Another possibility is the development of the concept of orbital spy planes.

The latter alternative is particularly interesting because it is part of the current trend of searching for means of reconnaissance that would bridge the gap between full-fledged satellites and classic unmanned aerial vehicles. One of the promising trends is pseudo-satellites, which we have described more broadly In this article. These machines can be used for remote reconnaissance, targeting or maintaining contact, but they cannot be used over enemy territory with a modern air defense system. The orbital plane could be a kind of analogue of the new era Lockheed U-2 – a machine that operates with impunity beyond the scope of air defense, but provides the opportunity to look at interesting things relatively closely. 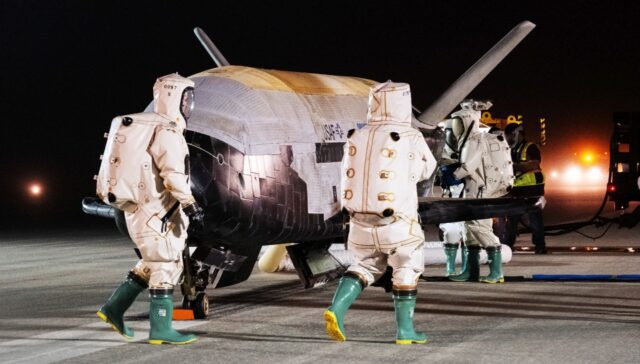 Technicians at X-37B.
(US Space Force)

X-37B is a relatively small machine – its length is 9 m, its width is 4.55 m, the maximum take-off weight is 4990 kg, of which 227 kg are per load. Power is provided by gallium arsenide photovoltaic cells and lithium ion batteries. Two X-37B aircraft were built. The first – making its record flight – spent more than 1,800 days in orbit in total, and the second – nearly 2,000. Both flew in space three times.

Briefly about the history of the X-37B

In the mid-1990s, NASA and the USAF began working in earnest on the concept of autonomous orbital vehicles. The first was a demonstration of the X-40A Space Maneuver Vehicle technology, which was used to test the aerodynamic system (similar to the space shuttle, which can also be clearly seen in the X-37) and flight control systems. The first test flight took place on August 11, 1998.

The X-37 development program began at NASA in 1999. Six years later, air tests began with the Scaled Composites White Knight as a carrier, and in April 2006 the X-37A made its first autonomous glide flight. The USAF considered the design promising and Boeing built an upgraded version called the X-37B on its behalf.

The first orbiter made its maiden flight into space on April 22, 2010, returning to Earth 224 days later. The second version followed in his footsteps on March 5, 2011 and spent 468 days in orbit. Subsequent flights took 674 days (from 11 December 2012), 717 days (from 20 May 2015) and 79 days (from 7 September 2017). Initially, the orbiter’s default landing site was the California base Vandenbergand Edwards Base as an alternative airport. However, the OTV-4 and OTV-5 missions ended at the Shuttle landing facility. With the exception of the OTV-5 mission, where the Falcon 9 Block 4 carrier rocket was used, the X-37B was launched into orbit by Atlas 5 each time.

See also: Israel allowed talk about the use of armed drones