Gaming is an incredibly popular hobby. Current research suggests that around two-thirds of Americans have played them, with similar figures seen in other developed nations. For this reason, gaming has become a popular subject for filmmakers.

Some gaming movies are based on particular titles, while others are based on the act of gaming itself. There are hundreds of these films out there, but here are some of the best.

Tomb Raider is one of the most successful video game franchises of all time. While being fun, it was also pioneering with its use of a female lead protagonist in an adventure game. The first game was released for the PlayStation, PC, and Sega Saturn back in 1996, requiring players to navigate Lara Croft, an archaeologist/adventurer through ruins and tombs in search of ancient artifacts.

Following its success, a movie based on the game was released in 2001. Despite starring Angelina Jolie, it received poor reviews due to a poor plot. 17 years later, Tomb Raider (2018) made up for this faux pas.

With Alicia Vikander playing Lara Croft and a script that was much better, Tomb Raider became the film that everyone wanted the first time around. A sequel has also been commissioned, though its release has been delayed indefinitely.

Casinos have also been a popular setting for movies, they provide a balance between a place where people are familiar while still creating the feeling of opulence and exclusivity. Even the games themselves, which a large proportion of the viewers will have played, provide a mechanism to create excitement and tension, particularly if it is between the film’s protagonist and his or her enemy.

In the 20th century, casinos were only easily accessible to a small proportion of the world’s population. If you didn’t live near one, then you would have to travel (often long distances) to enjoy a game of blackjack or to spin the reels of a slot.

Today though, online casinos have made this experience much more accessible to a much wider proportion of the world. Many of these casinos also run promotions and offer bonuses like ones that award free spins to new customers and during other situations. Despite casino games being enjoyed by many more people, they remain a common feature in movies.

One of the most popular casino movies from this century is 21 (2008). It’s a dramatization of the true story of the MIT Blackjack Team, a group of academics that used advanced card counting techniques to win large sums of money in casinos for several decades.

The technique is incredibly difficult to do successfully, though for expedient storytelling, it’s made to look simple in the movie. Although some have criticized 21, it’s a thrilling story from start to finish, although it deviates from the true story quite a bit, and is one that any card player will love. 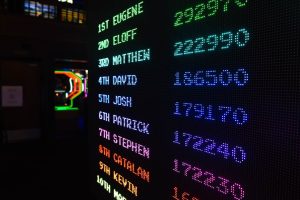 Released in 1983, WarGames is a film that tried to show the dangers of misusing computer systems. At the time it hit cinema screens, computers were just becoming mainstream, so the public was somewhat familiar but still skeptical about the technology.

WarGames follows the story of David Lightman, a student who spends his spare time hacking computers. Rather than studying, he uses his computer talent to change his grades. Then one day, he decides to hack a gaming company’s server to get access to their upcoming releases sooner.

He accidentally connects to a US government defense network and activates the country’s missile system falsely believing it was a new video game.

Of course, nothing like this could ever happen as systems like this cannot be just connected randomly. However, at the time of its release, WarGames felt real to many members of the public and it caused a lot of panic. The magazine Computer Gaming World described the film as “plausible enough to intrigue and terrifying enough to excite”, in fact, many people attribute WarGames to one of the driving forces behind the US’ Computer Fraud and Abuse Act of 1984.

Today, the film’s technology looks dated and the plot seems somewhat ridiculous, but it’s still a fun watch, especially for anyone who loves retro gaming.