According to the authorities, about 100,000 people took part in the event. People. The crowd rushed through the narrow alley near the Hamilton Hotel, the main venue for the event. At some point, some people fell, and others started falling on them. People can’t breathe.

Details of the accident are still under investigation. It is known that there was no fire or gas leakage at the site. Some local media reports said the crowd was crushed after a large number of people rushed to a bar after news of an unidentified famous person appearing in it. However, this information is unconfirmed.

– A lot of people came to the party in local clubs in costumes and were desperate for what happened. These were dramatic scenes – said one of the witnesses to the tragedy in an interview with the BBC.

See also  Germany: 16 deaths from the Corona virus in a nursing home in Brandenburg

151 people were killed, according to South Korean news agency Yonhap. 19 of them are foreigners. As the head of the Korea Fire Department told, these are the citizens of, among others, Norway, China and Uzbekistan.

At least 150 people were injured. Some of them are in serious condition. It is possible that the number of victims will increase even more. Many people were taken to hospitals with cardiac arrest.

South Korea: Panic at a Halloween party in Seoul. There are many victims

Panic erupts in Seoul. Emergency services have withdrawn from all over South Korea

More than 800 emergency workers from across the country, including all available staff in Seoul, have been deployed to the streets to rescue the wounded.

South Korean President Jeon Seok-gyeol issued a statement urging services to provide immediate treatment to the wounded and review the safety of mass event venues. He also instructed the Ministry of Health to urgently deploy medical teams to the crash site and secure beds at a nearby hospital. 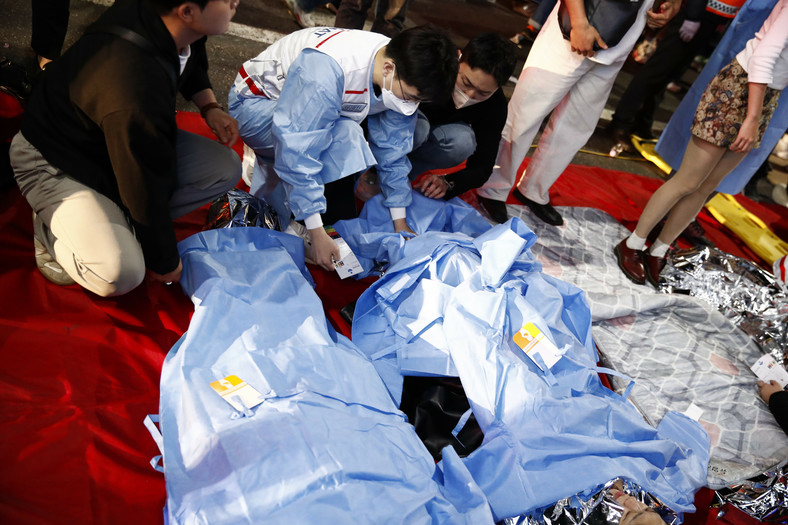 South Korea: Panic at a Halloween party in Seoul. There are many victims

South Korea. Horrific scenes in the streets of Seoul

Videos from Itaewon district in Seoul show body bags in the streets, medics doing CPR and trying to get people trapped under others. Please be aware that the rescue videos below contain scenes that may be uncomfortable for vulnerable people to watch.

See also  Gerasimov was injured in an attack in Ukraine? The Russian Chief of Staff fled in panic to Moscow

Among the victims and injured are foreigners. Medical services report a large number of young women between the ages of 20 and 30.

More recordings appear on the web.

There are also videos showing the moment of the crowding which may have resulted in a lot of people needing help. Because of the horrific images we do not publish in the article.

A man named Kim, who survived the tragic events in Seoul, says people fell on each other “like dominoes.” His statement was quoted to the Korean newspaper Hankyoreh, citing Sky News.

“Some people were yelling to help them, others spitting,” he said. He himself claims that he was run over, and help did not come until an hour and a half later.

Another survivor, Lee Chang-kyu, told the same newspaper that he saw five or six men pushing others, causing the people standing in front of them to fall to the ground.

Foreign Ministry Spokesperson: There is no information that the Poles will suffer

So far, there is no information on Poles who have suffered or may suffer as a result of the panic in Seoul – said the spokesperson for the Ministry of Foreign Affairs, ukasz Jasina, in an interview with PAP on Saturday evening. He stressed that the ministry is monitoring the situation immediately.

See also  Austria. The closure on non-vaccinated citizens has entered into force

“So far, there is no information about Poles who have suffered or may suffer in recent events in Seoul and there is no indication that this will change. However, we are constantly monitoring the situation immediately,” Jasina said.

South Korean President visited the site of the tragedy and Announcing control of events similar to those that occurred on Saturday in Seoul. “We will authorize relevant ministries to inspect not only Halloween-related events, but also smaller local festivals. All of them should be conducted in a safe manner,” he said.

National mourning in South Korea will continue until November 5. All flags will be lowered on half-mast government buildings. Civil and government employees will wear black ribbons as a sign of mourning.