In 2008, Hoffman made a documentary “Ukraine. The birth of a nation”. The monumental work covers a period of sixty years, from the end of World War II and the Yalta Conference, to the founding of independent Ukraine in 1991, to the presidential elections and the Orange Revolution in 2004.

Due to the war in Ukraine, this image is again gaining momentum. “I was shocked today because I expected everything. I knew that Russia would not accept the loss of Ukraine. Unfortunately, just as Hitler was not stopped in time, Putin was not stopped in time. The West continues to make the same mistakes” – admits the director.

Summing up his artistic achievements, the director admits that for many years cinema has been a part of his life. as claimed Today is a kind of diary..

Jerzy Hoffman He was born in Krakow on March 15, 1932, into an assimilated family of Jewish doctors practicing in Görlitze. The outbreak of war and anti-Semitic actions from Nazi Germany forced the Hofmann family to flee to the East. Soon, in 1940, eight-year-old Jerzy and his family were deported to Siberia. He did not return to Poland until the end of the war.

The majority of family members who remained under German occupation were victims of the Holocaust. The experience of living in Siberia had a significant impact on the development of the pre-adolescent. In children’s circles, especially in Siberia, strength and courage define power. I changed school four times because our places of exile changed four times. I was new four times. The Russians took advantage of the evacuees from different republics – weak and weak, like children from Leningrad intellectual families. You are a pole. I was different. I was a stranger”—such a memory of Hoffman was included in a book dedicated to him by Marta Stockfish” Jerzy Hoffman. Hot heart.

Returning to Poland, he continued his education and after five years in Bydgoszcz he passed the high school leaving examination, after which he wanted to study directing. However, in order to apply to the Directing Department at the State School of Cinema in Lodz, other studies had to be completed. Therefore, he turned to the USSR and took up his studies at the All-Russian Institute of Cinematography in Moscow. “I went to Moscow, to WGIK. There were friendships with Eduard Skorzewski, with whom I worked for many years. Together, Marta Mizaros was with me for one year and Vytautas Zalakiaviczius, an outstanding Lithuanian director, who sadly died. “

His father Zygmunt, who in 1943 joined the formation of the 1st Polish Infantry Division Tadeusz Kosciuszko. And the director recalled this story in an interview with “Midrasz”: “I stood before the MKiS competition commission and got to study in Moscow because of … nepotism. I was good at Polish and history. It was even worse with questions directly related to the movie. Behind the committee chair’s thick glasses, I could see an eye that stared at me at least in disapproval. I realized it was over. The chief picked up my papers and said, “Hoffman.” – Isn’t Zygmunt Hoffmann from the first squad your relative? «. “Yes, he is my father!” “Thank you”. – He said. The head of the commission was the eminent cinematographer Stanisław Wall, my father’s friend from the front.”

In 1955, Hoffman graduated from university and before he began making feature films, he was shooting documentaries with his friend from university, Edward Skorzewski. He made his debut with the social documentary “Note, Hooligans” (1955). In the following years, still in a duet with Skórzewski, he performed, among others, “Children Accuse” (1956), “Souvenir of Kalwaria” (1958), “Carusilla Chueca” (1958) and “Kinds of the Day” (1959). He made his debut in 1962, when “Gangsters and Philanthropists” worked with Skórzewski. Two years later, the duo made a director “Law and Fist”Or “Polish West” starring Justo Holopek. The film was based on a script by Joseph Hen, and the music was composed by Krzysztof Komeda.

See also  Opozda and Krlikowski had imaginations in choosing a name for their son, but Skrzynecka went a few steps further.

Get out of Poland

The turning point in Hoffmann’s career was undoubtedly the events of March 68, when the anti-Semitic campaign prompted many people of Jewish origin to leave Poland. Because of her, Alexander Ford, a brilliant figure of Polish cinematography, director of “The Teutonic Knights” (1960) – a super production that attracted crowds of viewers to cinemas, left the country. Ford was also supposed to direct The Deluge, but when he left, the idea fell through. Finally, Hoffmann, who had also been suggested to leave, began the trilogy. As he said in one of the interviews, he was sometimes interrogated until three or four in the morning, and between seven and eight he was already on a filming site, where attempts were made, in vain, to provoke a rebellion. The attack on Hoffman ended when he told the investigators that he could leave Poland, but for the USSR – the director’s wife was a Soviet citizen. After the success of “Mr. Wołodyjowski”, which was also Hoffmann’s first independent film, Mieczysław Moczar congratulated his parents on having such a son.

pictures of Mr. Wołodyjowski It was carried out, among other things, in Bialy Bor near Koszalin, in Chęciny near Kielce and in Krakow. The cast included, among others: Tadeusz Łomnicki (as Jerzy Michał Wołodyjowski), Magdalena Zawadzka (as Baśka), Mieczysław Pawlikowski (as Zagbyl), Barbara Brylska (as Krzysi), Jan Nowicki (as Ketlingha-Beijovic) and Danielb . Zawadzka, who remembers her work with Hoffman, told PAP that the director “knew very well what he meant, and his requirements for the cast were reliable and professional. There was nothing left behind.”

The film was well received by viewers – an audience of 11 million – and critics. Krzysztof Mętrak wrote in “Film” magazine shortly after the premiere that Hoffmann’s “success for Mr. Wołodyjowski” “lies in the fact that he was faithful to the original”. “I do not mean fidelity to the plot, this is the least important, I mean to convey a certain emotional aura in which they act” – he explained. Filming won, among other things, the Golden Duck for Best Film of the Year. At the same time, Hoffmann’s television series called “The Adventures of Mr. Michai”.

It premiered in 1974 “Flood” With Olbrychski as Kmicic. When Wojciech Jerzy first saw the film, he was supposed to exclaim: “This is American cinema!”. You could say he was right. The American Film Academy has nominated “Deluge” for an Academy Award in the Non-English category. In Poland, the historical film won the Polish Film Festival in Gdansk.

The Deluge was sent into production due to concerns of the Central Committee of the Polish United Workers Party that Jasna Góra’s defense would not become the film’s central element. At the conference, she was ordered to shorten the scene unveiling the image of the Virgin Mary. We looked into the eyes of editor Zenon Bureki and cut this scene short… with three frames and the second with 24 frames. The film was watched for the second time and it was found that it was good, ”- stated the director.

In 2014, on the 40th anniversary of the premiere, a digitally renewed and slightly abridged version was created “Deluge Redivus”. The film was shown during the opening ceremony of the Film Festival in Gdynia, and the applause lasted several minutes. The director breathed new life into his work. 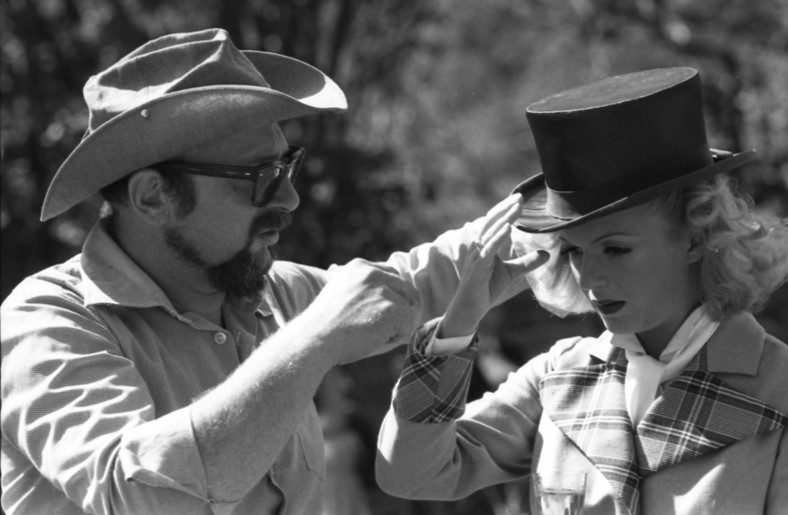 Jerzy Hoffman and Gabriella Konaka on the set of “Liber”, 1976.

It premiered in 1976 “leprosy” With Elżbieta Starosteca and Leszek Teleszyński. Six years later, during martial law – on April 12, 1982 – the premiere of “Znachor” with Jerzy Bińczycki in the main role was held. Anna Dymna and Tomasz Stockinger created one of the most famous couples in the history of Polish cinema with this title. However, Hoffmann had dreamed of completing the Sienkiewicz trilogy all along. It happened in 1999, when the long-awaited film “With Fire and Sword” was released. Thus, Sienkiewicz’s first part became Hoffmann’s last.

The festive premiere of “With Fire and Sword” was held on February 8, 1999 at the National Theater. The main roles were played by Michal Shebrusky (Skrzetuski), Alexandre Domogaro (Bohon) and Isabella Skorobko (Helena). The production, which at that time was the most expensive in the history of Polish cinematography, was – according to the director – “probably the cheapest historical epic story of this kind in the world.” “If it was made in the West, it would cost at least $40 million; if it was made in the United States, it would cost $100 million.” – He then pointed out. 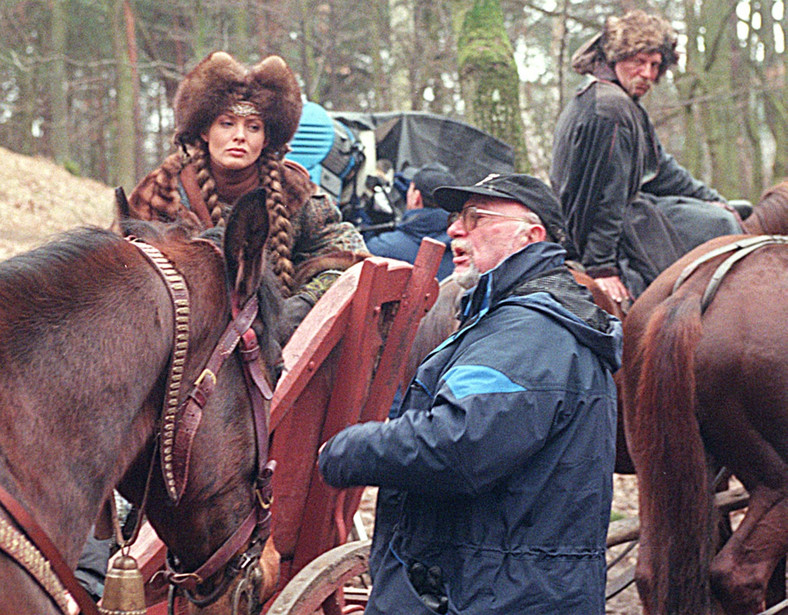