professional destinies Irina Laskowska It didn’t turn out the way I imagined. Although she appeared in such famous films and series as “Salto”, “Krzyżacy”, “Everything for sale”, “Czterdziestolatek”, “07 report” or “Polishways”, she entered the history of Polish cinema thanks to one role – a role in Tadeusz Konwicki’s directorial debut in 1958 “Last day of summer”. However, this was not her only major film appearance.

in 1962 Irina Laskowska I played along Mariusz Dmochovskythe unforgettable Stanislav Wokolski from “Lalka”, in the movie “Men on the Island”. November 19, 1962 marks the 60th anniversary of the premiere of this production.

The director of this psychological drama is Jan Laskowski, the actress’s brother. According to filmpolski.pl’s website description, the film is about a clash between “two attitudes towards life and love, documented and harsh with serious and reasonable”. Nine men mow the lawn fortifying the banks to protect an important building. Two of them want to settle an old quarrel – because of one of them, the woman they loved committed suicide. Unexpectedly, Magdalena (played by Irina Laskowska) appears on the island, and becomes the object of attention of the men who have been in seclusion for several weeks. What really happened there?

Unfortunately, the movie went unnoticed, though Laskowska and Dmochowski’s performances were praised.

“I was a beautiful, talented and daring girl,” the actress said years later.

See also  She rebelled against the queen's custom and began to wear the forbidden color. Princess Diana also created a new tradition

Irina Laskowska was born on March 15, 1925 in Piotrowis, near Vilnius. In 1945, two years before she graduated from the acting department of the Warsaw Academy of Dramatic Art (then based in Łódź), she made her stage debut.

Laskowska first appeared on the movie screen in 1948 in the movie “Steel Hearts”, but it was her role in “The Last Day of Summer” (1958) that marked the real start of her acting career. In the intimate drama about the meeting of two strangers on the beach, Laskowska co-starred with Jan Machulski. The picture was shown for the first time on August 4, 1958, and the cinematographer was the brother of the actress Jan Laskowski.

After the success of “The Last Day of Summer,” Laskowska was assigned to “Teutonic Knights” (1960), playing Princess Aleksandra. She also starred alongside Zbigniew Cybulski, Andrzej Łapicki and Wojciech Siemion in another picture by Tadeusz Konwicki, Somersault (1965). She then appeared in Jerzy Hoffman and Edward Skórzewski’s Gangsters and Philanthropists (1962).

However, she never repeated the success of “The Last Day of Summer” and forever remained in the memory of viewers as the heroine of Tadeusz Konwicki’s production.

In subsequent years, Laskowska played only episodic roles, including in Andrzej Wajda (“Everything for Sale”, “Catching Flies”, “The Marble Man”). She also appeared in serials: in “Czterdziestolatku”, “Report 07” or “Polish Roads”. She also appeared in the comedy Oh, Karol (1985). Her last film role was in ‘Pornografia’ (2003) directed by Jan Jacob Kolski.

“I liked acting in the movie,” she said years ago in an interview with “Dzinik Tribuna. There are more people on site, more interesting events, trips to the open air. The movie is an adventure.”

Irina Laskowska passed away on December 6, 2019. She was 94 years old. She was buried in the military cemetery in the Mujahideen. Powązkowska in Warsaw. 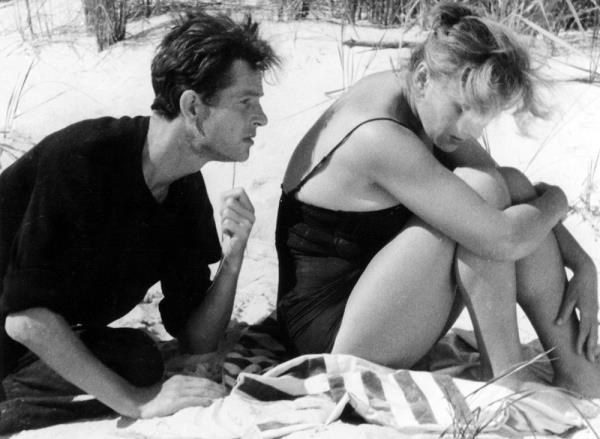 Laskowska made her cinematic debut in 1948 in the movie “Steel Hearts”, but it was her role in “The Last Day of Summer” (1958) that marked the real start of her acting career. Jan Machulski co-stars in the heartwarming drama about two strangers meeting at Laskowska Beach.