Recall that the ship, with a length of more than 200 meters and capable of carrying about 5,500 cars on board, caught fire on February 16 in the morning. The Veleti Ace was sailing from Germany to the United States, and the fire started when the ship was in the Atlantic Ocean, about 90 nautical miles from the Azores.

The entire crew of 22 people was evacuated by helicopters of the Portuguese Navy. No one was injured.

Approximately 4,000 Volkswagens remain on board the abandoned, drifting, and spent car carrier in flames, including 1,100 Porsches and 189 Bentleys as well as Audi and Lamborghini. Among them are electric and hybrid cars equipped with lithium-ion batteries, and this greatly complicates the process of fighting fires.

At the moment, there is a small extinguishing unit next to the burning ship, which does not extinguish the fire so much as cools the hull in an effort to prevent the fire from spreading into the area of ​​​​Felicity Ice fuel tanks. Soon, two specialized firefighting ships will arrive and only then can the main rescue operation begin. They come from Gibraltar and the Netherlands. The first should appear soon, while it comes from Holland – no later than February 23. 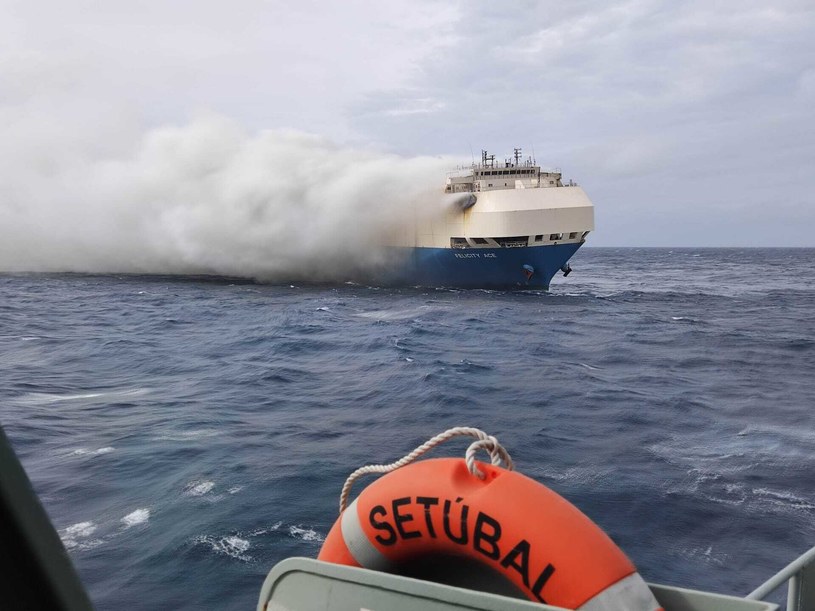 It is also known that the car carrier will not be towed into the port of Azores because it is too large.

Sea water is not suitable for extinguishing Felicity Ace. There are two reasons. First of all, water will not extinguish burning batteries, moreover, pouring water on the upper decks can lead to instability and, accordingly, overturning of the ship.

It’s currently not clear how the fire at Felicity ES occurred, and there is no evidence that the batteries were the cause of the electric cars. However, in the shipbuilding industry, it has already been pointed out that the crews of ferries and car carriers, in the face of the development of electric vehicles, are exposing themselves to an unprecedentedly greater and early risk. 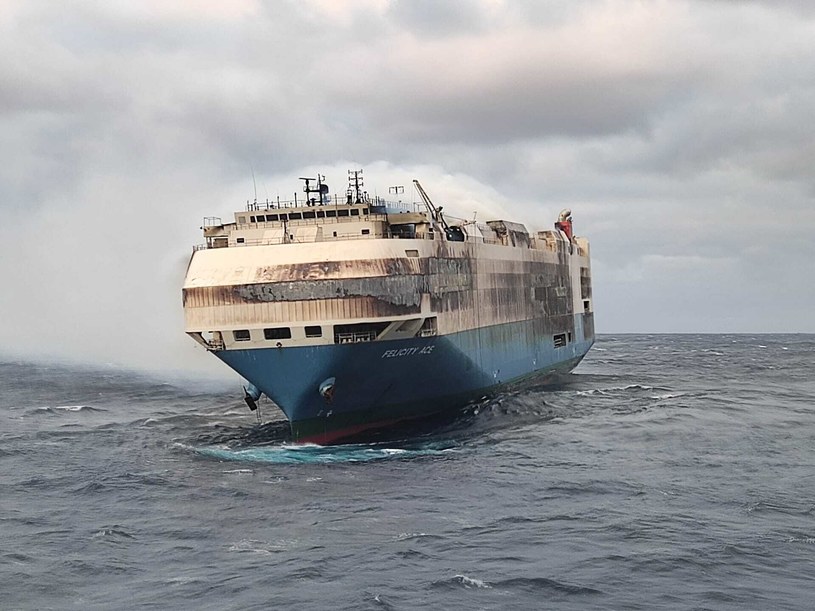 Batteries spontaneous ignition is rare but has been known to occur. Often, electric cars catch fire during charging. Either way, it must be caused by a technical failure causing the battery to overheat.

An extremely hot battery ignites violently (the oxygen emits and reacts with the electrolyte), which can be seen in the surveillance videos on which the fires were recorded.

Such a burning electric car, even if it is standing on the street, is difficult to extinguish, even impossible. Rescue operation consists in pouring copious amounts of water in order to cool the battery and put out the fire. Then the car is placed in a special container and poured over it with water. Otherwise, the chemical reactions that occur in the damaged cells of the battery will cause the fire to reappear.

It should be noted that the battery burns intensively and at a very high temperature. For example, aluminum Tesla bodies can completely melt, which means that the temperature of the fire is more than 600 ° C!

Some time ago, German firefighters published a recording showing the movement of the Opel Ampera E. Although the video itself is only 20 minutes long, the entire firefighting process lasted 6 hours. And it was only about one car…

Therefore, emergency services should not be expected to be able to rescue Felicity Ice or at least some of her payload. Meanwhile, US analysts initially estimated the value of losses at the moment at $380 million. So in reality they will be much higher.

See also  indebtedness. Shipping companies are drowning in debt. The end of PKSs is a sentence for villages and towns